In the early 20th century, three brothers, Mikhael, Emmanuel and Giries Rock had a house built for the family. Emmanuel was responsible for overseeing the construction of the house in 'Ayn Karim while his two brothers, Mikhael and Giries ran the family business, Rock & Company in England. Giries returned to Palestine after the business in England was affected by the economic depression of 1929/30.

The house was home to numerous members of the Rock family namely: Giries and his wife whose nickname was Mannana and their children Jacques, Anton, Hanna, Julia, Sabat, Marguerite, and Christina. It was also home to Rock Rock and his wife Maria and their children, Emmanuel and Yacoub, Alfred, Yvonne, Pascal and Bernadette. Emmanuel known to his grandchildren as Sido Emmanuel sadly passed away before the identical twins Emmanuel and Yacoub were born – the former being older for having come into the world five minutes earlier. Sitti Sultaneh, also known as Umm Rock along with Priscilla and Philomena, sisters of the three senior Rock brothers also lived in the house.

The house is known in the village for the extraordinary story that happened to Maria, known as Umm Manawel. She was pregnant with her last child Pascal when she was hanging the laundry on the wooden balcony of the house. The balcon was not very solid as a result it gave way under her feet and collapsed. She was hanging in mid-air for short while, clenching tightly the iron hand rail or darrabsin. But Maria could not hold her heavy weight and she fell to the ground. However, clinging to the darrabsin eased her landing on a pile of stones. The stones were supposed to be used to build the tomb of Sido Emmanuel, but finally were left abandoned for years. Umm Manawel was bruised and in a lot of pain, but miraculously survived without breaking a single bone. The family chose not to bring her to the hospital but relied instead on natural ways of healing and called the neighbourhood butcher, Yousef Yacoub to the rescue. The butcher sacrificed a sheep and skinned it. He wrapped Maria with the hot sheepskin, which gave her relief from the pain and helped relax her swollen body. The unborn baby, Pascal and pregnant mother, Umm Maria recovered from the fall. 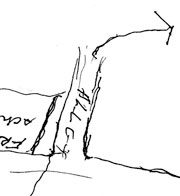 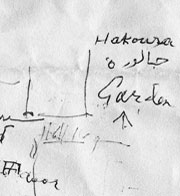 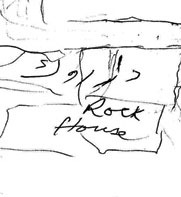 Go to 'Ayn Karim towards St. John the Baptist Church. Upon reaching the narrow street that leads you to the church, also known as the Franciscan Monastery, walk a few steps - to your right you will find lawyer Pascal Boulos's house. Take couple more steps and you will find Mantura Rock's house, still on the right. It has an entrance facing the church, which you encounter upon making a right turn. Abu Manawel's house is situated to your left, shortly before you reach the church; it faces Mantura Rock's. The left part of the house is let to Zacharia Tannous and used as a textile shop. The right is leased and used as a batih or watermelon shop, open only during the fruit's season. When you reach the end of Abu and Umm Manawel's house take a left and where the ground floor of the house is facing the church there is a quaint grocery that is let to a man known as Othman Safiya.

Should you be heading to Dar Rock's during fig season, you might see Umm Manawel heading in the rawiyah or basement a few times a day to check up on her twin sons, Emmanuel and Yacoub. The two young boys are known to have ramad during fig season – an eye infection caused by the dust from the leaves. It causes them to have difficulty to keep their eyes open in the light, so Umm Manawel has them stay in the rawiyah, a completely dark space, so it soothes their pain. If you stray while you are heading there during that time of year, you might hear them playing in the rawiyeh as for them it is a moment of adventure. Should it be after sunset though, they would already have gone to sleep in the house, so just ask anyone in the neighbourhood if they know where the twins live, or where the house of the woman who survived a miraculous balcony fall is situated. 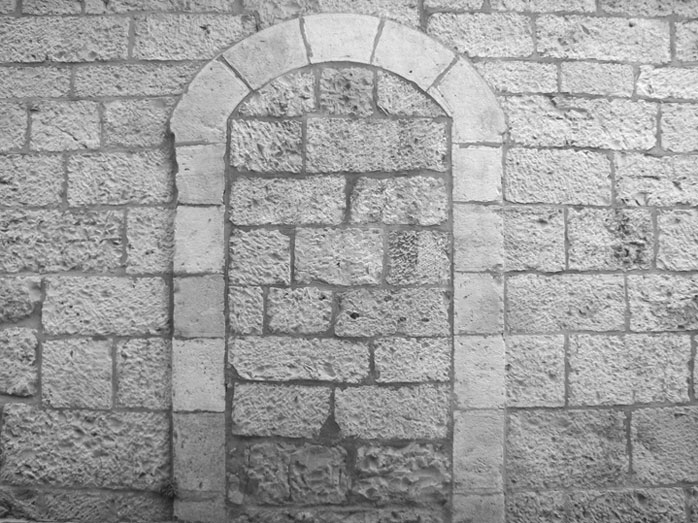