In the early twentieth century, Abdallah Bek Abdul Rahman El-Alami, who held a high rank in the Ottoman Empire gave instructions that any Jerusalemite passing by Aleppo be invited to his house. He was from Jerusalem and missed his city dearly, so this was his way of remaining connected with its inhabitants. El-Alami was a very wealthy man who lived in a large house with his family, a man who also provided secret shelter as well as flour, rice and heat to Armenians in his area, that were persecuted by the Ottoman Turks. No one would have dared to search his house, due to his high position, under Sultan Abed El-Hamid Abdallah.

Among one of El-Alami's visitors was Daoud Taher Dajani Daoudi and Khadijeh Mustafa Kutub, known as Abu and Umm Faek. The couple had gone to do a pilgrimage to Mekkah, Saudi Arabia but on their way back to Jerusalem they passed by Damascus and Aleppo to buy goods, such as rosewater and all kinds of spices, a custom known as hejje ou hajje. El-Alami extended an invitation to the Jerusalemite couple, and they cordially accepted. Abu Faek and Umm Faek spent a good time at Dar El-Alami's, as the two families got along very well. Umm Faek told her husband that she wanted El-Alami's beautiful daughter, named Amneh, for their son Mohammed. Abu Faek therefore proposed the idea and El-Alami immediately approved.

So when Mohammed Daoud Taher Dajani and Amneh Bek Abdul Rahman El-Alami got married in 1923, Amneh, the bride moved to Jerusalem. Since she was leaving her family in Aleppo, her father wanted to make sure she was happy. He offered his beloved daughter a big wooden mother of pearl box, filled with different kinds of clothes and precious jewelry. When Anmeh arrived in Jerusalem, she lived with her parents-in-law, in their house in Lower Baqa’a. It is there, that the newlyweds had their first son, Sliman. Shortly after, Abu Sliman and Umm Sliman moved out of Abu and Umm Faek's house and rented a modest house in the same neigbourhood. There they had four more children: Hind, Abla, Jawad, and Layla.

After Abu Sliman had earned enough money from his businesses, he had a house built for his family in Lower Baqa’a, a mere walking distance from his parents. In 1936 when construction was completed, his family moved into the newly built house, which is the property featured here. Abu and Umm Sliman had three more children: Salah, Amnbara, and Walid. For the ninth birth, Umm Sliman contacted a mid-wife named, Stella to rush to the house once she felt she was entering labour. Abu Sliman who was in Egypt at the time, wished to call the unborn child Khaled, should it be a boy, a name he loved. Stella arrived at the house and noticed complications, so she called Dr. Mahmoud Dajani and Dr.Hajjar to assist her. By the time Dr. Mahmoud Dajani and Dr.Hajjar arrived at the house, and tried to deliver the baby, the infant had already died. He had one cry and was about 6 kilos.

Being in the real estate business, Abu Sliman purchased additional plots of land in Lower Baqa’a, where he had other houses constructed, and rented those properties out. Abu Sliman also owned the Daoudi Trading Agency in Mamilla. He was a well-known merchant and had among his customers the nuns that ran the German Colony School. Umm Sliman who was sadly suffering from a heart illness was too weak to care for all her children, therefore the nuns kindly offered Abu Sliman to help by having his daughters, Abla and Hind as boarders. In 1942, the British Mandate closed the German Colony School after which, Abla and Hind were boarders at the Italian School in Talbiyeh for a year. When the Italian School closed at the end of WWII, the girls moved to the Schmidts Girls School, where their sisters, Layla and Amnbara were attending. 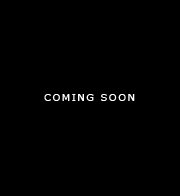 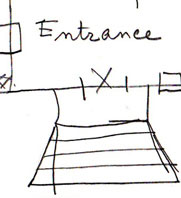 From the Morkus Hotel, leave the Old City from Bab-el-Khalil. After about 50 metres you will see Daoudi Trading Agency, with the Arab Bank on the second floor. Behind this building, you can see the top of a Church, which faces the Shamaa' Quarter. Continue, until you can make a left turn, passing by the Palace Hotel and the Mamilla Cemetary. Proceed straight ahead in the direction of the King David Hotel and the YMCA. You will eventually come across a field of olive trees, which belongs to Der Room or the Catholic Church. Once you arrive at the Soconu vacuum petrol station, you will have the option to either turn left where there are train tracks that would lead you to Upper Baqa’a or to take a right, where you will head towards Lower Baqa’a. From this petrol station make sure to take a right. You will eventually pass the Police Station and Freij Grocery, which is at a left corner. Do not enter into that side street, for it will lead you to the Regent Cinema and German Colony. You would have also passed Café Roy, but do not let the aroma of delicious cakes and biscuits lure you in at this Lower Baqa’a bakery; just continue straight, until you reach the Hidayat Family Pharmacy, which is on your left. At that point you will notice, a narrow road to your right. At that corner is Dar Tahboub, which you cannot miss as it is common to hear their two dogs barking. Upon making a turn on that street, you will see to your left, Dar Barakat and Dar Haddad's. You know you reached Dar Dajani's when you see children playing football, hopscotch, jump rope or taka wa igree in the street. Should you notice a young girl bicycling, it must be Abu and Umm Sliman's daughter, Abla Dajani, so ask her for assistance. You always have the option to telephone the house, should you need further instruction. The number is: 2220. 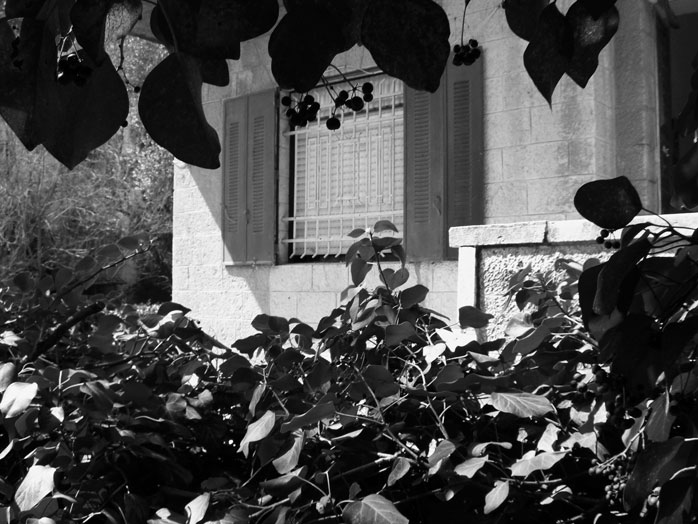