'Quaint Arab-style House, Deal not to be missed'

In 1934, Hanna Soudah married Janaf Mansour and rented the first floor of a house in Musrara. Hanna's brother Yacoub along with their mother Mariam was also living in the apartment. The basement of the house was rented by the Helou family and the top floor by the lawyer, T. Kamal. An Armenian family was renting the other side of the top floor. Abu Issa and Umm Issa's three first children Issa, Evette and Odette were all born at the Government Hospital in the Russian Compound, at walking distance from the house. Sadly one day, as Umm Issa was cleaning the stairway area that connects the first floor of the house to the street, she slipped and lost her unborn son.

When Mikhael Yacoub married in early 1940's he moved out of the apartment. Shortly after his wedding, Sitti Mariam passed away. Abu Issa, Umm Issa and their children-Issa, Evette, and Odette moved to another apartment in Musrara – the one featured on this page. Sami, their fourth child was born in 1942, roughly two years after they moved to this new apartment. They let the second floor of the house, Khalil Su'an was renting the first floor and the owner of the house Emile Ghazzawi was living on the top floor. 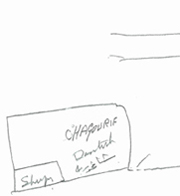 From the New Gate, you need to cross the street to the Notre Dame. Don't go uphill toward the Sahar Photography Studio and the French Hospital as that will lead you to Mamilla. Instead, walk downward on the narrow street. As you come downhill you will get closer to the Syrian Catholic Church located on your right hand side. On your left hand side is a plot of land with lots of foliage. After that area, make a left turn into Musrara. Upon turning left, you will see on your right hand side the Al-Mazi Hotel, a small two-storey house. You might cross Abu Issa in the street as he is known to play cards and gamble at the hotel. Beware of the neighbourhood boys on their bicycles as they wait for the Ramallah Bus to hold on to in order to catch a ride up the steep street. Walk a few metres more and to your left is the house where the nurses of the Government Hospital live. Continue walking straight on and a few metres further on your left hand side you will reach Abu Hanna's Grocery. To your right you will pass by the former apartment that Hanna and Janaf Soudah were renting when Sitti Mariam was still alive. In front of it is the Knesset. You might come across Bardo, an Armenian boxer who does his morning run in the neighbourhood. If you continue walking straight, a few metres to the right of the Knesset, is a house where an Armenian family lives. Right below it is a small car repair shop owned by a technician from Nablus named, Sa'ade. A few steps from the shop, on the left hand side is the Salesian Girl School, Dom Bosco, where the boys watch the girls when school ends. Instead of walking straight take a right toward the open space. On both sides of the street there are homes. At the left hand corner is Abu Yusef's Liquor Store and at the right hand corner is Abu Artin's Shoe Repair Shop. Continue walking downhill and a few metres further you will see the neighbourhood boys playing football turning part of the street into their private playground. Dar Soudah is the house to the left of the playground – facing Dar Atallah’s. 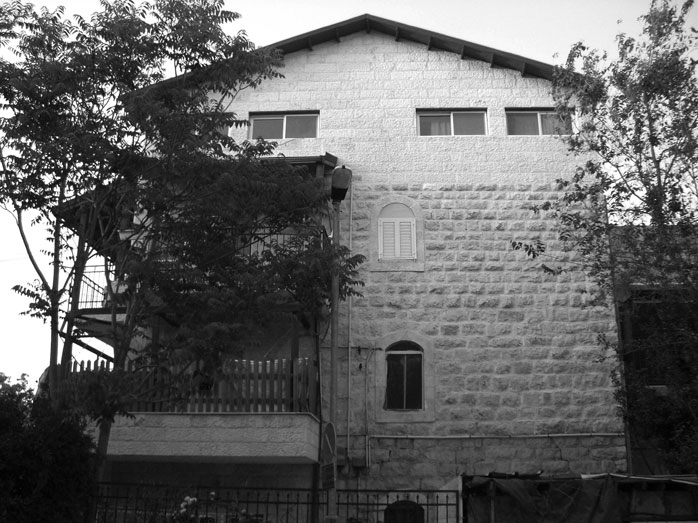