In the late 1800's Simon Lorenzo, a Pharmacist married Frederika Seraphin. His Pharmacy at the New Gate was located near the Frère School at five minute walking distance from his house in Mamilla, that he had built for his family. Frederika's two brothers, Palestinian architects, Seraphin Seraphin and Anton Seraphin built their sister's and her husband, Simon Lorenzo's two-storey house in Mamilla. The Seraphin brothers were also the architects of the St Catherine Cathedral in the Nativity Church and the Coptic Convent in the Prophet Street/Shara al-ambia in Jerusalem. Abu Yusef and Umm Yusef had five children: Yusef, Anne-Marie, Albert, Elisabeth and Badia.

Their second son Albert got married to his neighbour, Claire Raheel in 1944. She moved from the Dar Raheel apartment in Mamilla, which was on the second floor of a corner house with a large balcony - to the Dar Lorenzo's which is only a one minute walk away. Khalil Raheel rented the second floor and his daughter, Claire's window faced the zarub and gave a view to Dar Lorenzo. Rib'he Raheel rented the third floor of the building. The sister of the Miskawi Tailor lived above the shop, which was located on the ground floor facing the Mamilla Cemetary. The Miskawi Tailor Shop was for men.

Albert and Claire were not only neighbours, but they both worked on Jaffa Street roughly a five-minute walk from where they lived. Albert worked as Chief Clerk for the Mouhandessin or Architects at the Municipality of Jerusalem under the British Mandate and remained in that position after he was married. Claire worked at the Post Office in Jerusalem in the Mail Registration division for four years, a position that was quite extraordinary for a young girl of sixteen years at the time. When she turned twenty, she resigned from the Post Office to get married to Albert but because she was under age she only received five or six Palestinian pounds compensation. She bought a camel hair jacket and camel hair coat with the money. Also living in the house was Umm Yusef as Abu Yusef. She was called, Umm Joe by all. Then there was also the unmarried Anne-Marie Lorenzo. 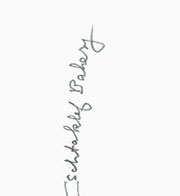 Head towards Mamilla. When you reach the Makbara or Muslim Mamilla Cemetary turn left on the narrow pedestrian passage or the zarub. To your left is the majestic Palace Hotel which stretches along the entire length of the passage and to your right are various Palestinian family homes. Go past Dar Abu Shar, Dar Hanna Tannous Franji, Dar Faran, Dar Haddad, and Dar Sfeir, on your left where the Palace Hotel property ends, you will see a garden with all, sorts of sahjars such as fig trees, pomegranate trees, peach trees, berry trees and olive trees. You cannot miss this two-storey house as there is a tractor parked in the garden and stones lying on the ground. The two Seraphin architects had wanted to build another house in the garden; a large plot of land. The family was getting bigger, but sadly they passed away one after the other before the construction could begin and everything remained in the garden untouched. From the garden of Dar Lorenzo's, look to your right and you will get a view of the St. Julian Hotel, owned by the Haddad family. 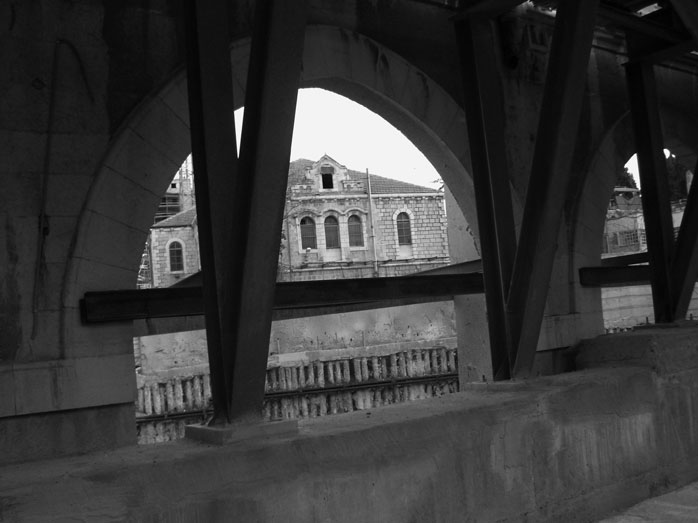